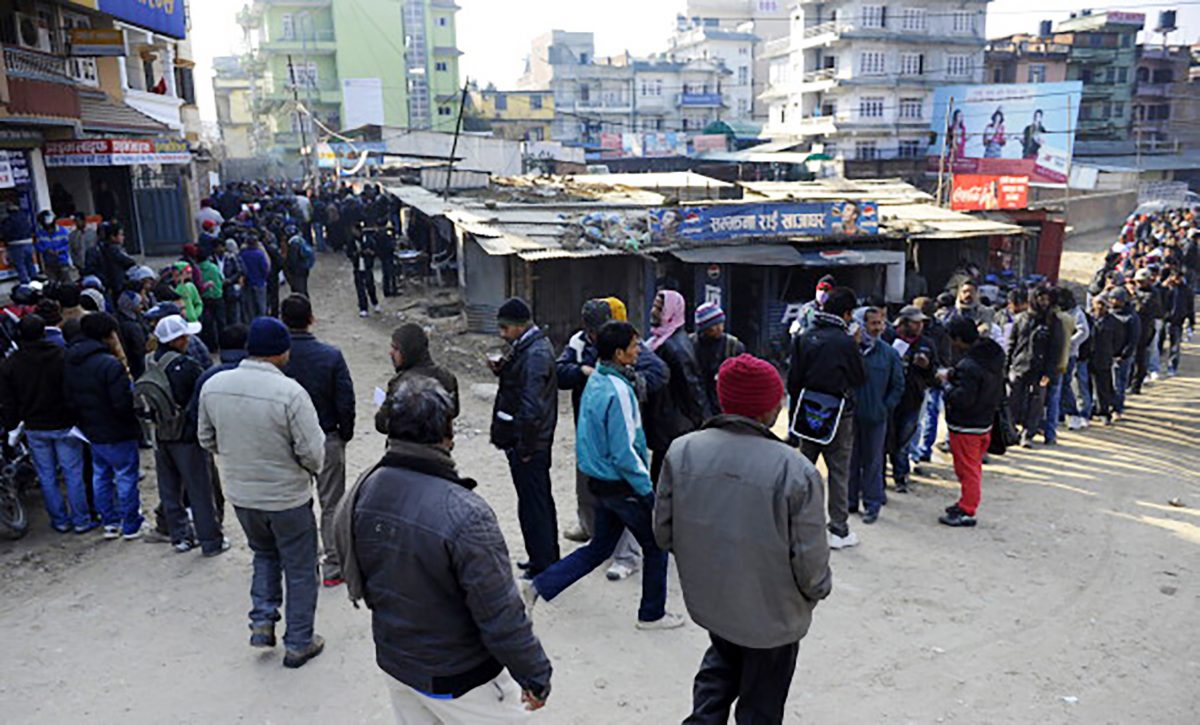 The Nepali authorities should make all worker fee payment illegal and significantly increase their enforcement capacity, as part of a package of reforms in order to ensure fair recruitment, FairSquare said today in a 162 page report into recruitment practices in Nepal, Kuwait and Qatar.

FairSquare Projects is a London-based non-profit human rights organization with a focus on migrant workers’ rights issues. The report, Nepal to Kuwait and Qatar: Fair recruitment in review, which examines how workers from Nepal are recruited for work in Kuwait and Qatar, is part of the Five Corridors Project, which has been seeking to provide guidance on what states can do to ensure fair and ethical recruitment.

In addition to its recommendations on fees and inspections, FairSquare also recommended that the Nepali authorities immediately introduce legislation to make licensed labour recruiters liable for the actions of any unlicensed partners and intermediaries, and that it cooperate and coordinate with other origin states that send workers to the Gulf in the identification of abusive employers. The report commended Nepal’s efforts in a range of areas, including the increased importance it had placed on worker protection in the negotiation of new bilateral arrangements with destination countries including UAE and Malaysia, and the development of technical initiatives aimed at increasing transparency in the recruitment process and eliminating deceitful practices such as contract substitution.

“Nepal’s migrant workers make huge sacrifices to support their families and Nepal’s economy and they deserve every protection that the Nepali state can provide, which includes ensuring that recruitment is fair. This report reflects where progress has been made in that regard, but its key contribution is in outlining to the government the precise steps that it needs to take to end systematic abuse in the recruitment process, starting with the abolition of fees,” said Anurag Devkota, FairSquare’s Nepal researcher and human rights lawyer at LAPSOJ.

Nepal’s “Free Visa, Free Ticket” policy has since 2015 limited the amount workers can be charged to 10,000 rupees (USD 83) for workers migrating to the Gulf and Malaysia. Nepal calls this “zero cost” recruitment, but in reality, migrant workers routinely pay far in excess of the legal cap, with sums up to 160,000 rupees (around USD 1,350) not uncommon. In 2019, the Supreme Court ordered government bodies to enforce the FVFT policy effectively. The failure to ban recruitment fees outright creates a grey zone that enables agencies to charge far in excess of the legal limit, and the fact that a group of agencies committed to “zero-cost recruitment” has so far been unable to mobilise any workers underscores the failure of the policy.

Some workers featured in the report said that when they refused to pay fees above the legal cap, agents told them that their jobs did not fall under the policy, or that their employers refused to cover any recruitment-related costs. Others reported not receiving any receipts for the payment of fees, receiving receipts only for 10,000 rupees, or being threatened with deportation if they reported how much they had actually paid. One man, who sold his bike and some gold in order to pay 116,000 rupees (US 965) to fund his migration to Kuwait, told us he was asked on the day he travelled to record a video clip in English stating that he had only paid 10,000 rupees (USD 83), the legal maximum.

Recruitment agencies for their part told us that there is intense competition between origin states for highly prized jobs in the Gulf and Malaysia, and that if they do not charge workers they will not be able to secure jobs from employers. The Covid-19 pandemic has made this competition even fiercer, leaving workers at risk of being charged even higher fees. The Nepali government in 2020 called for “a more concentrated approach among labour sending countries using platforms like the Colombo process” to deal with this problem. The Five Corridors Project is calling on Kuwait, Qatar and other destination countries to more effectively regulate employers to provide a much more consistent demand for ethical, zero-cost recruitment, including tackling the practice of demanding “kickbacks” from recruiters in exchange for demand letters.

The report also details how the Department of Foreign Employment (DOFE)’s investigation capacity and skills are out of step with the scale of the abuses identified in Nepal’s recruitment industry – the department continues to employ only four investigators, while there are more than 800 licensed agencies and tens of thousands of informal subagents. A 2020 Memorandum of Understanding between DOFE and the police has the potential to alleviate capacity problems by allowing Nepali police to carry out preliminary investigations based on worker complaints and to fully investigate unregistered recruiters, but the report recommends that Nepal increase the capacities and capabilities of DOFE investigating staff, and that it increase resources devoted to investigating and prosecuting corruption within the department. The report also recommends that Nepal significantly strengthen the capacity of diplomatic missions in the Gulf to support migrant workers facing exploitation and other abuses. MOLESS has acknowledged that capacity at diplomatic missions in major destination countries is “inadequate”.

“Nepal generates huge sums of money from the remittances that its migrant workers send home, yet it allocates scant resources to ensuring that the ministries with a mandate to protect these workers are adequately staffed and properly trained. That’s a self-defeating policy both in economic and human rights terms”, said Anurag Devkota.

Background
With remittances making up almost a third of its GDP, Nepal is one of the largest remittance recipient countries in the world.

The report’s findings and recommendations are based on 133 in-depth interviews with a wide range of stakeholders and experts either remotely or in person in Nepal, including NGOs working on migrant workers’ rights, trade union representatives, academics, think-tanks, journalists, lawyers, recruitment agencies, and representatives of intergovernmental organisations such as the ILO and the IOM. Interviews were conducted with a number of current and former senior officials at the Department of Foreign Employment (DOFE), Ministry of Labour, Employment and Social Security (MOLESS), and the Ministry of Law Justice and Parliamentary Affairs. We also spoke to Nepali diplomats at missions in the Gulf. We benefited from the ability to refer to the 2020 MOLESS Labour Migration Report, a thorough and transparent evaluation of Nepal’s migrant labour governance.

The other countries featured in the Five Corridors Project are Canada, Kuwait, Mexico, Myanmar, the Philippines, Qatar, Taiwan and Thailand.

A full copy of the report, with a summary of findings in Nepali, is available at fivecorridorsproject.org