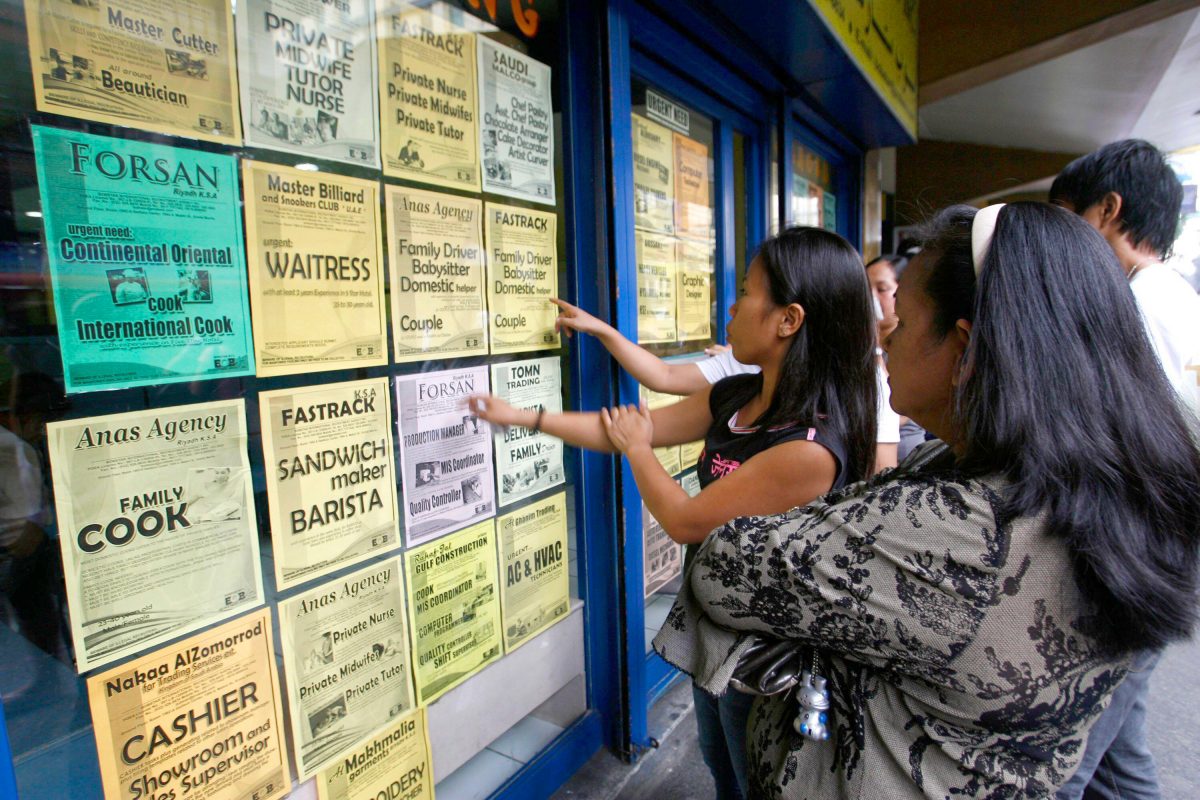 Report into recruitment practices recommends that Philippine authorities abolish all recruitment fees for overseas workers and set up a taskforce to investigate licensed recruitment agencies.

The Philippine authorities should abolish all recruitment fees for its overseas workers, in line with internationally accepted definitions, and implement a series of other reforms to effectively incentivize fair and ethical recruitment in the country, FairSquare Projects said today in a 102-page report into recruitment practices in Taiwan and the Philippines.

FairSquare Projects is a UK-based non-profit human rights organization with a focus on migrant workers’ rights issues. The report, which examined how workers from the Philippines are recruited for work in Taiwan, was part of the Five Corridors Project, which has been seeking to provide guidance on what states can do to ensure fair and ethical recruitment.

In relation to the Philippines, FairSquare also recommended that the authorities institute an ethical recruitment framework into its licensing and regulatory machinery, pass legislation that explicitly prohibits Philippine lending agencies from selling migrant worker debt to foreign lending agencies, and enable prospective new agencies to obtain a license without having already identified new markets and received job orders. The report commended the Philippines’s efforts in a range of areas, including its impressive legal and regulatory framework and its extensive and well-resourced overseas bureaucracy, which can provide direct support and assistance to its overseas workforce, its use of standard employment contracts and its efforts to exercise some level of control over foreign employers and recruitment agents. It also recognised the progress that the Philippines had made in tackling illegal recruitment, but was critical of what it described as a narrow characterisation of this offence.

“The Philippines has long had a reputation as being the origin country that offers the best protection for its nationals overseas, but it faces very little competition in this regard and its overseas workers continue to be subjected to unfair recruitment and serious abuses abroad” said Nicholas McGeehan, FairSquare’s co-director. “One area where it can and should aim to go further is in relation to recruitment fees and in working to ensure that more ethical recruitment agencies can enter the sector and prosper.”

It is clear from research that many Filipinos who migrate for work overseas have positive experiences. One Filipino migrant worker interviewed for the project said that she had bought a rice mill and a shop in the Philippines with the money she had earned working in Taiwanese factories. Domestic workers constitute nearly 50% of Filipino workers overseas and it is their mistreatment abroad that has arguably shaped the protective dimensions of Philippines migration policy in relation to placement fees, standard employment contracts and bilateral labour agreements.

Recruitment agents in the Philippines are prohibited from charging placement fees for their services to domestic workers, for example, whereas for most other workers (seafarers and workers going to countries that themselves prohibit placement fees are the other exceptions) they can charge workers a placement fee equivalent to one month’s salary. The Philippines recruitment sector is quite open about its desire to continue charging workers’ placement fees, and agencies continue to use loopholes in the law to pass recruitment costs onto workers, by over-charging workers for mandatory training, medical and accommodation costs, or working in tandem with lending agencies who charge high-rates of interest on loans. Because of these loopholes, which the authorities have done little to address, the prohibition on domestic workers paying placement fees has had little to no effect – domestic workers pay as much in fees as other categories of workers.

The Philippines introduced what it now describes as a “hard-to-enter, easy-to-go” policy in 2002, with the aim being to make it difficult for new entrants to get into the recruitment sector, and easy for the authorities to strip the licenses from violators of the regulations, but the policy appears to have had the effect of blocking new, ethical actors from entry, and prospective new agents are encouraged to buy pre-existing licenses, circumventing the entry requirements altogether. A further disincentive to ethical recruitment is the volume-driven business model that the Philippines Overseas Employment Agency has encouraged through its annual performance awards which are weighted heavily in favour of deployment and reduces the administrative burden (and associated oversight) of agencies that deploy large numbers of workers abroad.

Almost all of the Filipino workers interviewed in the course of this project had paid significant sums of money to secure jobs in Taiwan, with the exception being electronics workers employed by firms following strict “employer pays” recruitment fee policies.

The report’s findings and recommendations are based on more than 70 interviews with a wide range of stakeholders and experts either remotely or in person in Taiwan or the Philippines, including NGOs working on migrant workers’ rights, trade union representatives, academics, think-tanks, journalists, lawyers, recruitment agencies, and representatives of intergovernmental organisations such as the ILO and the IOM. We met with numerous Philippines officials in Taiwan, and in the Philippines, we held preliminary meetings with the Philippines Overseas Employment Administration in November 2019, but were unable to secure follow up meetings with the POEA, or other key agencies such as the Overseas Worker Welfare Administration (OWWA). We sent a summary of the report’s key findings and recommendations to the Philippines authorities in April 2021.

A full copy of the report is available at the dedicated Five Corridors Project website.